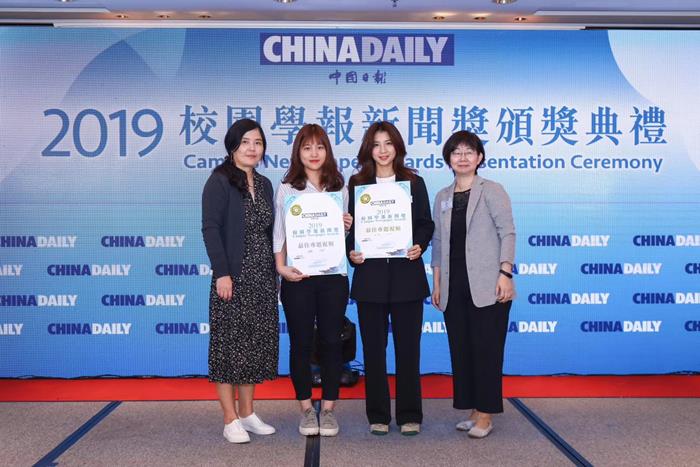 Three groups of students from the Department of Media and Communication has won the China Daily 2019 Campus Newspaper Awards.

A team of five students under the supervision of Dr. Joe He in the MA in Communication and New Media progam won the Champion of Best in Feature Video Reporting (Chinese) for its 11-minute documentary titled “Birdland.”  The panel of expert judges commented on the work as “a presentation of the relationship between birds and human kind through beautiful visual images.”

A group of TVB students under the supervision of Mr. Haosen Sun won the first Runner-Up in Feature Video Reporting (Chinese) for its documentary titled “When We Met – 3D Printed Aritficila Limbs”; and another group of BATVB Students won the first Runner-Up Video News Reporting (Chinese) for its television news report titled “Swimming Pool Air Pollution – Potential Hazard on the Health of Lifeguards.” The Group was under the supervision of Ms Elsa Kwok.

This competition has been organized by the China Daily over the past 10 years. Joining the competition in 2019 were students from 50 top universities in Mainland China, Taiwan, Hong Kong and Macau, who submitted more than 1000 works.