Prof. Jonathan Zhu’s project, titled “Modeling and Visualizing Big Data on Twitter”, attracted keen attention at the Big Data Exhibition held on October 14, which was a highlight event to celebrate the 30th anniversary of City University of Hong Kong.

The project was a joint effort among the Lab, Microsoft Research Asia, Nanyang Technological University of Singapore, and Hong Kong University of Science and Technology. Nearly 100 million tweets, collected from Twitter during the U.S. presidential election in 2012, were analyzed based on an expanded model of Zhu’s zero-sum game theory of agenda-setting and visualized through a RiverTheme scheme developed at Microsoft Research. A dozen projects were demonstrated at the Exhibition, with the Twitter project being the only study from College of Liberal Arts and Social Sciences and the rest from College of Science and Engineering. Attendants were impressed by the project’s massive data size, seamless integration between social science theory and computational model, and sizzling effects of interactive visualization.
Details of the project have been reported in Xu et al. (2013). Visual analysis of topic competition on social media. IEEE Transactions on Visualization and Computer Graphics, 19(2), 2012-2021. The video visualization shown in the Exhibition is available on YouTube. 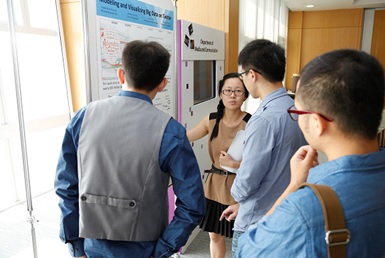